Tankers Still Have a Long Lifeline Ahead of Them

The tanker market is expected to keep on growing over the course of the coming years, until we hit the so called peak oil demand, after which it should be a constant state of decline. In its latest weekly report, shipbroker Gibson said that “the current spike in global oil prices and a tight supply situation has put the issue of peak oil demand back into focus. Those who thought the Covid-19 demand destruction of 2020 would permanently dent world oil demand were quickly proven wrong as shown by the 5.7% rebound in demand in 2021. Furthermore, demand has continued to expand despite oil prices trading firmly in the $100/bbl range since the start of the invasion of Ukraine and the looming threat of an economic recession. This calls into question when exactly peak oil demand could occur and what this might in practice look like as the demand outlook varies by region, particularly in terms of decarbonisation policies. Most current estimates place peak demand occurring between 2030 and 2040, although it is worth noting the subsequent decline in demand is unlikely to be cliff edge and oil is likely to play a role in the global economy for decades to come past 2040”.

According to Gibson, “in their latest monthly report, the IEA has revised down its demand growth estimates for 2022 and 2023. It now forecasts demand at approximately 99.2 mbd and 101.32 mbd respectively versus 99.43 mbd and 101.6 mbd in their June forecast. This is being driven by a combination of economic uncertainty and signs that rising prices are causing some demand destruction; a weaker than expected start to US driving season gasoline demand may be evidence of this as consumers begin to cut back their spending across the board in response to higher and more persistent inflationary pressure. Whilst Chinese demand may be showing some signs of recovery as it eases strict “Zero-Covid” restrictions; overall economic activity remains weak and oil demand is yet to fully recover to robust levels. Chinese demand will likely be a key uncertainty in at east the short-term. Since the invasion, few have dared to predict longer term oil demand given the uncertainties involved, with the IEA’s flagship oil 2022 report being understandably delayed past its original March release date. Few other forecasting agencies are willing to forecast long term oil demand with any degree of confidence”. 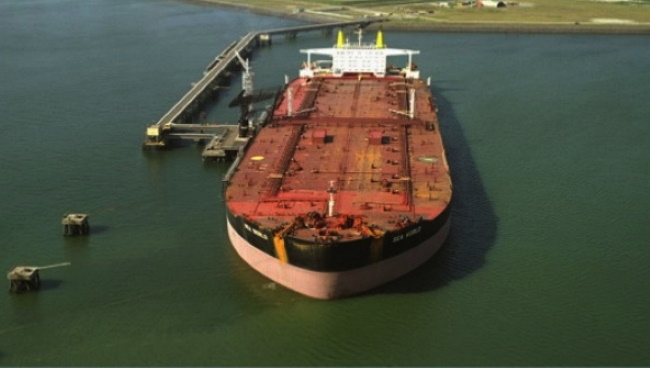 The shipbroker added that “nonetheless, despite this shorter-term concern, demand has been improving compared to 2020 levels. Easing mobility restrictions are increasing seasonal demand for jet and road transport fuel, particularly in emerging markets, which in turn has resulted in higher refinery runs as refiners look to capture higher margins. This has led to higher crude demand; and comes as the global crude trade continues to shift and readjust to the new trade reality following sanctions on Russian oil. Other areas of continued oil demand include power generation where European and Middle Eastern utility companies are increasingly viewing oil as a cheaper alternative to natural gas and LNG in electricity generation. The petrochemical sector also represents a key source of expected future oil demand, in particular naphtha demand has been strong in recent years, although the IEA is now forecasting a 220 kbd drop in demand in 2022 as current uncertainties reduce demand in the short term, although in the longterm future economic growth should improve this outlook”. 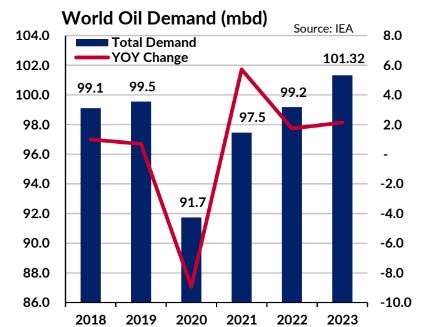 “When it comes to putting an expected date on peak oil demand, a key factor is decarbonisation policy. Europe, the UK, US, and China are all scheduled to phase out the sale of new gasoline and diesel vehicles by 2040; with sales expected to decline dramatically over the course of the 2020s and 2030s in line with broader targets of net zero by 2050. This indicates peak oil demand is likely to occur between 2030 and 2040 but some regions such as Europe could peak earlier than developing economies in Asia, Africa, and the Middle East. Therefore, slower longer term oil demand growth rates and an eventual peak in demand suggests tanker owners will need to engage in lower fleet replenishment and this investment will likely concentrate on replacing older and less economical tonnage as well as ensuring regulatory compliance. Over the medium term, aside from recession risk, the oil trade is expected to continue growing before a longer-term peak and then decline once this eventually materialises”, the shipbroker concluded.
Source: Nikos Roussanoglou, Hellenic Shipping News Worldwide